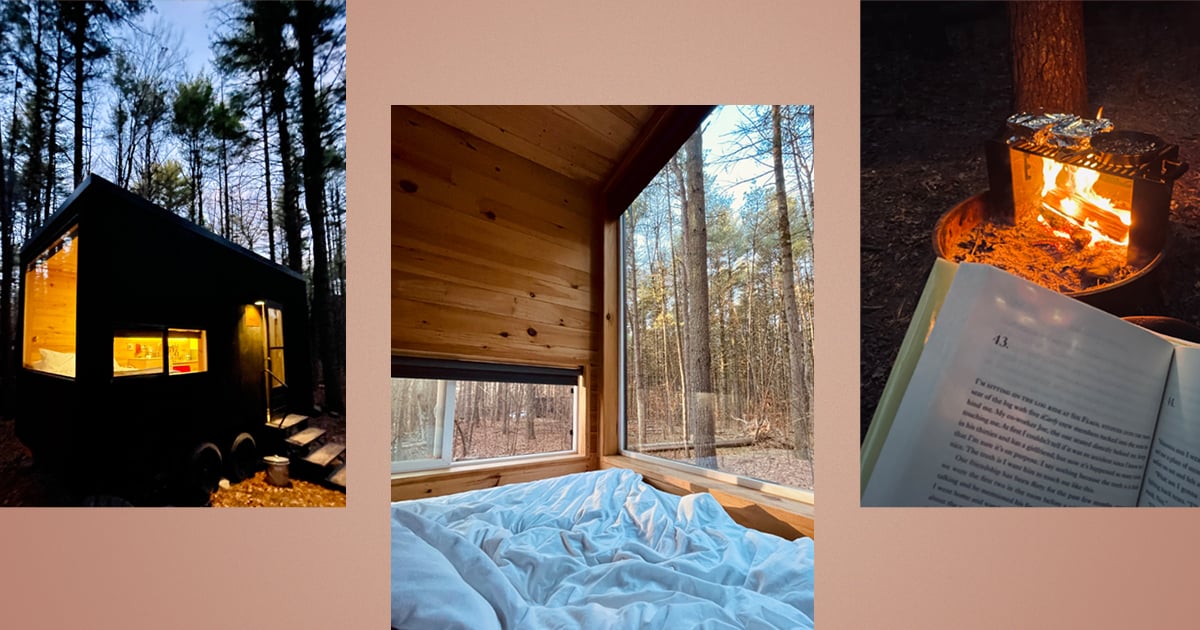 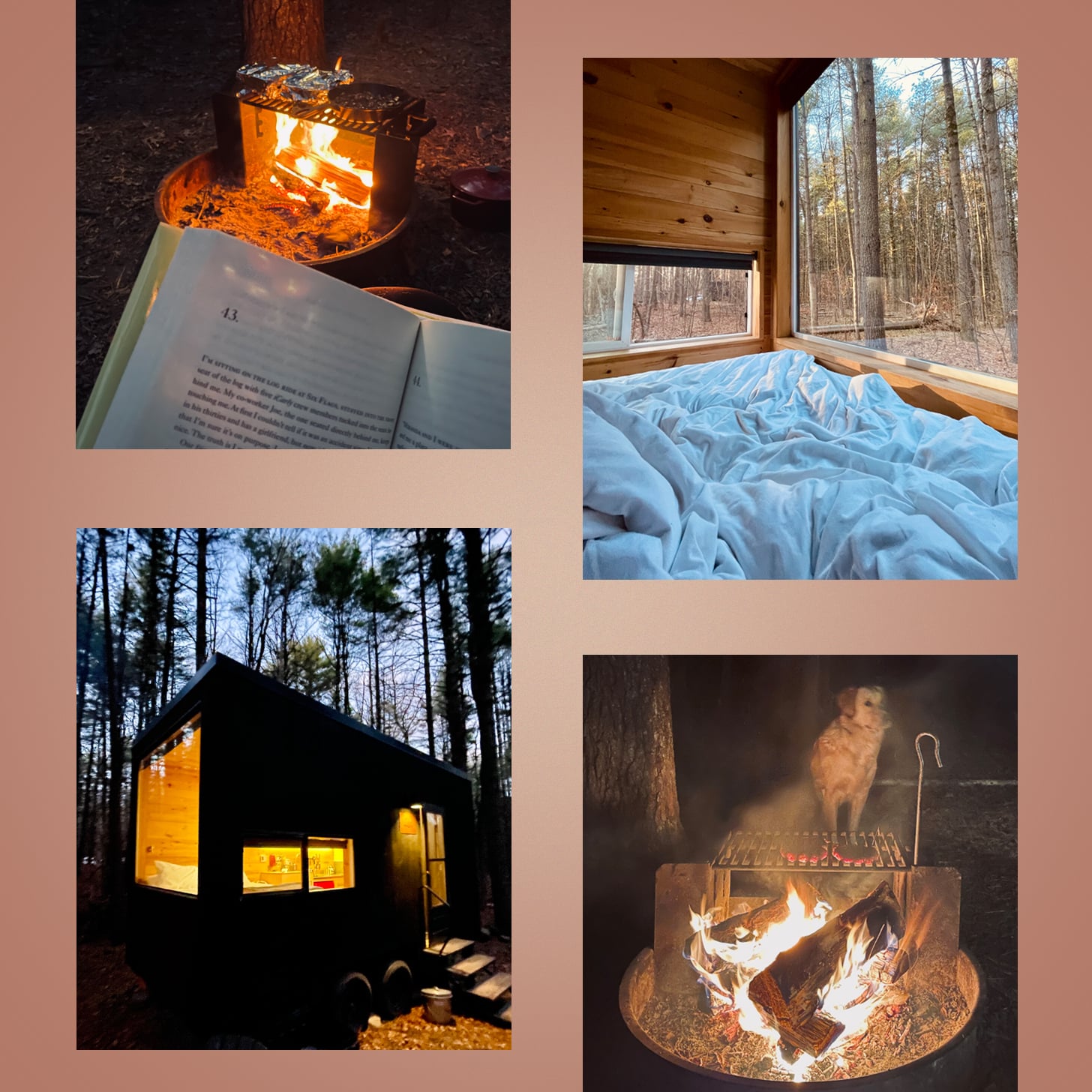 I wanted to try something different this year for Thanksgiving. Instead of going home for the holidays, what if I used the time off to run away from society. Frankly, I’d romanticized this plan all year.

The goal was to stay at a cabin where I’d attempt to cook a Thanksgiving meal, try to literally unplug from my phone and phone-like devices, and test out this theory that nature calms anxiety levels. My partner, Nick, and golden retriever, Nala, were up for joining me in the challenge.

As a city girl, I knew leaving society completely behind wasn’t realistic. In other words, I wasn’t looking to pitch a tent. So I turned to Getaway for a more “glamping” experience — running water, a mattress, etc. The service offers tiny cabin rentals in rural locations all over the country, and it’s driven by wellness values, such as carving out space for rest and rejuvenation, finding connection, and fostering creativity. It completely removes the temptation to zone out over Netflix or social media. Not that there’s anything inherently wrong with those things — but as someone who works online, I’d long been suspecting that even “relaxing” media was frying my brain more than it was helping me unwind. I needed something different.

So, we booked a cabin at Getaway’s Eastern Catskills, NY, location. All of the outposts are roughly two hours away from major cities in order to create, as the website puts it, distance from “the relentless demands of work, schedules, and technology.” The location was far enough away to help us feel like we were truly “getting away,” but not so far that it made our car-hating dog miserable.

But what sealed the deal for me was the lack of WiFi and the phone lockbox they encourage you to use. Shortly before we arrived, we made our Thanksgiving calls to loved ones, then somewhat apprehensively entering the semi-self-imposed no-cell phone zone. Here’s how it went.

The Day Before Thanksgiving 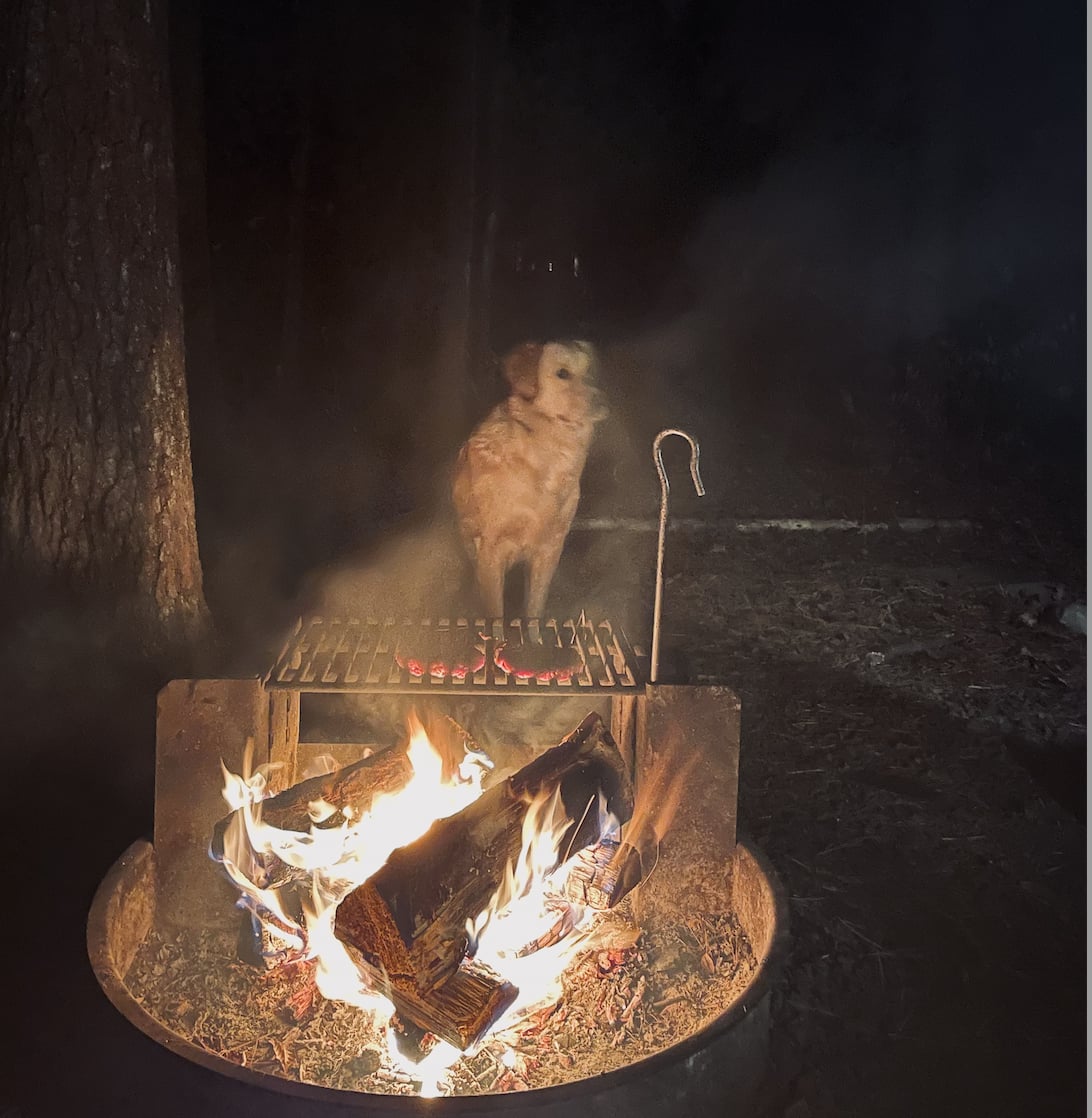 When we pulled up to the campground, my first impression of the cabin was that it reminded me of the tiny house movement that gained popularity around 2008. It’s roughly 140 to 200 square feet, with the majority of the space taken up by a queen-size mattress. The wall-to-wall window, featured prominently in Getaway’s marketing materials, was as impressive and cozy as it had looked on Instagram. It’s essentially a large picture frame of the outdoors, so even when you’re inside, you can still enjoy being in nature.

On the table, we found goodies left for us: a bag of dog treats for Nala, a puzzle to tackle, an activity booklet (complete with crayons), and a s’mores kit. The shelves held a handful of books on exploring the outdoors alongside some additional provisions you could purchase, including hot chocolate or pour-over coffee.

Being late in the year, the sun went down before 5 p.m., so we hurried to get the fire going with the wood and fire starter they provided (for $8). That’s when we hit our first roadblock.

We couldn’t get the kindling to catch, and without Google to tell us what we were doing wrong, we were stumped. (Nala was no help; she was busy testing out her night vision skills nearby.) We repositioned the logs over and over, and I started to worry: maybe this was a bad idea. Cooking a Thanksgiving meal in the woods?! What had I been thinking? The idea of enjoying a cheesy Hallmark movie at home sounded ridiculously tempting.

But just as I was ready to give up, the flame caught. Soon enough, we were enjoyed flame-grilled burgers and romaine. The fact that’d we’d figured it out on our own made the meal taste even better. Success. 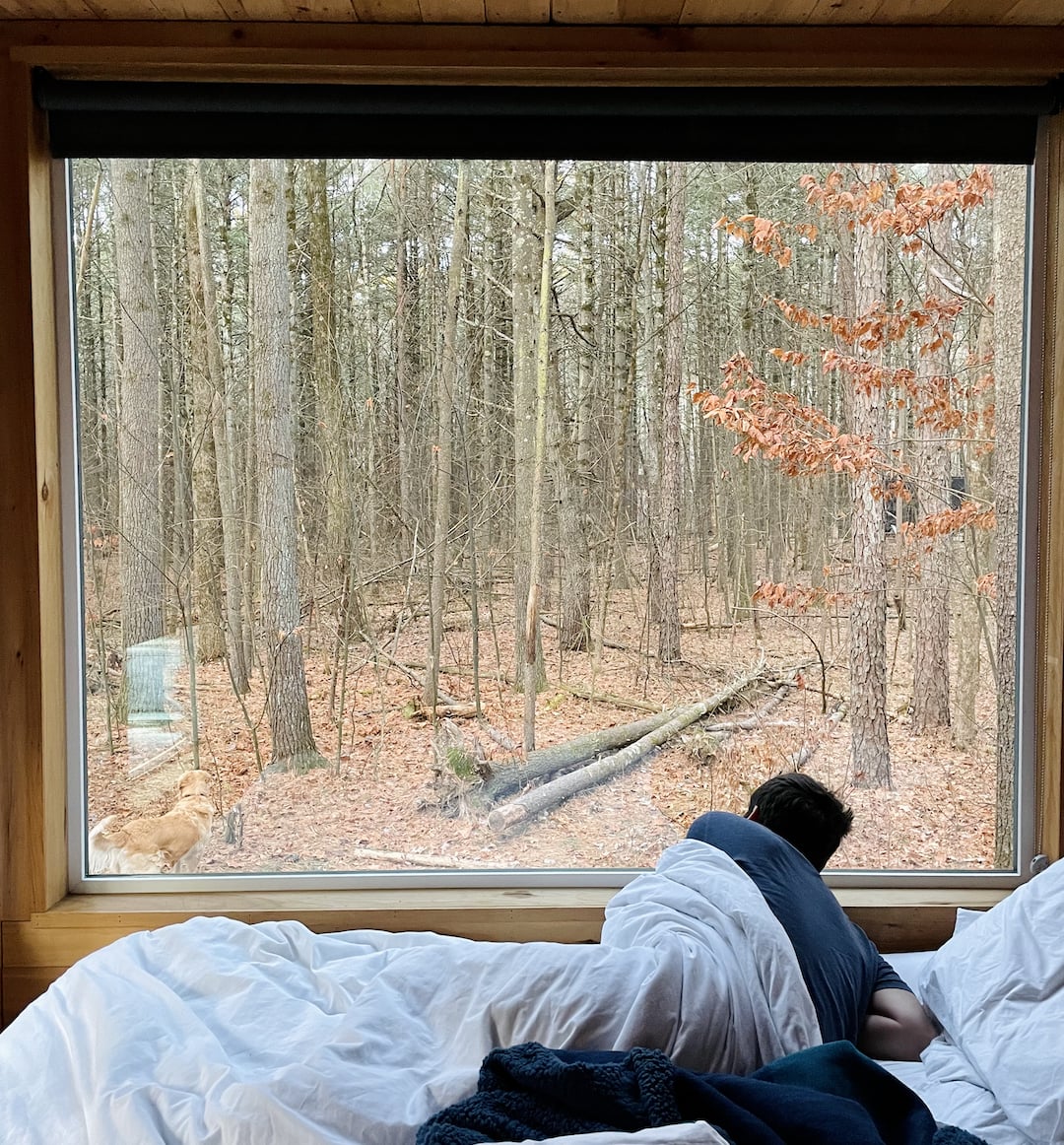 Today was the big day. No parade, no football game, no early Black Friday shopping. The morning was quiet: Nick took Nala outside to play fetch, I cooked breakfast at the cabin’s little stove. Then we crawled back into the big bed and dozed off.

Now, this might not sound like a big deal — but I never take naps. I have a hard enough time getting to sleep at night. But nap I did. I awoke with a jolt at noon; my first thought was, “Oh no!” But then I realized there was no rush: nowhere I had to be, nothing especially pressing to do. So I pulled out a book — one that I’d picked up and put down and picked up and put down for the past few months.

Eventually, Nick rolled out of bed and took another stab at the fire, which started much easier this time. Nala and I followed outside, and we began to prep our Thanksgiving meal.

We weren’t so delusional to believe we could manage cooking a whole turkey over a campfire, but we still managed to put together an impressive meal: duck breasts, mashed potatoes, sweet potatoes, green bean casserole, carrots, corn bread, and for dessert apple turnover. (Some of that, of course, we’d cooked at home and brought up with us.)

Using only a campfire and the cabin’s single stove top was a new way of cooking for us, but it finally made me do that thing everyone talks about: mindfulness. Not that I sat on the floor of the forest to meditate. But I wasn’t thinking ahead of the next step. It was just the chop, chop, chop of the mushrooms, the sizzle of the duck breasts in the cast-iron pan we brought with us, and the simmer of the potatoes boiling in the dutch oven. It was just me, Nick and Nala. No one to impress.

After eating and enjoying a bottle of wine, we were sleepy again.

The Day After Thanksgiving 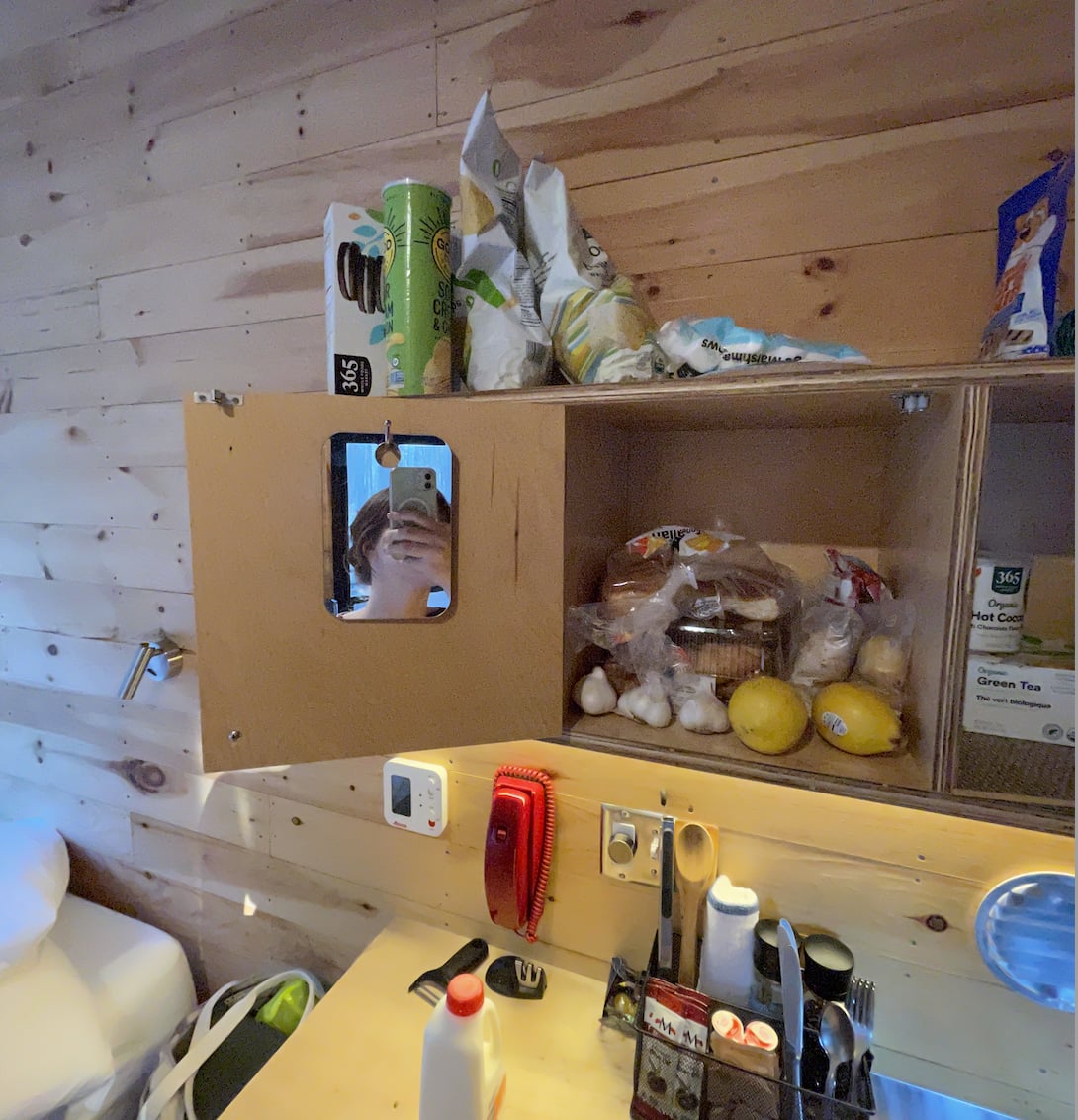 The next morning we woke with the smell of smoke still clinging to our clothes. We patted ourselves on the back for actually cooking our Thanksgiving meal over the campfire. Then, we spent our last couple of hours in the cabin getting ready and packing up the car.

This was when I noticed one last benefit of our Getaway cabin, something they don’t advertise: the lack of mirrors. There was only one tiny mirror dangling on the back of a cabinet door that could easily be removed. Without constantly being faced with my reflection, combined with no social media, I stopped criticizing myself. I didn’t notice that my negative inner voice had shut up until the last day, when I was able to identify one more reason for a quietness in my brain, compared to the usual buzzing. I had no desire to put on make up, do my hair, or even get out of PJs. Unexpectedly, the mirror detox became my favorite part of the trip.

Also — hold for applause — I finished the whole book. Yes, I had that much downtime. It was glorious.

As we pulled away to drive back to the city, with Nala in my lap, I kept the windows rolled down. I wanted to breathe it all in one last time before going home.

Amenities You Can Expect

All cabins have their own outdoor space with a fire pit, picnic table, and chairs. They also contain the following amenities:

Getaway.house has locations nationwide, with cabins starting at $200 per night.