The news was unavoidable: Back in March 2002, the couple that wore the world’s most memorable denim-on-denim red carpet looks—Britney Spears and Justin Timberlake— had broken up. While pop fans mourned, Spears was papped shortly after the split gripping a to-go coffee cup and sporting a baby blue Juicy Couture tee emblazoned with the phrase “Dump Him” in orange font.

The tabloid image of Spears was a cultural reset that has lived on, etched into every millennial’s mind as the pinnacle of Y2K pop culture. There wasn’t much to know just yet about the split—though by December 2002 Timberlake’s R&B breakup anthem “Cry Me a River” would make it seem like Spears was unfaithful—but the T-shirt’s two simple words were a dig at Timberlake and a statement to the media: She had no regrets about ditching the NSYNC star, and maybe he wasn’t exactly the teen dream everyone thought he was.

“I consider Juicy Couture to be the ultimate slogan T-shirt line,” says stylist and Instagram fashion historian Gabriel Held. But it wasn’t the first time we had witnessed the brand infiltrate the zeitgeist. “We have a reference in Sex in the City with Carrie asking if she can pull off this vintage ‘Hang in There Baby’ tube top. In the ’80s, we had the ‘Frankie Say Relax’ and Katharine Hamnett ‘Choose Life’ shirts, too,” he adds. 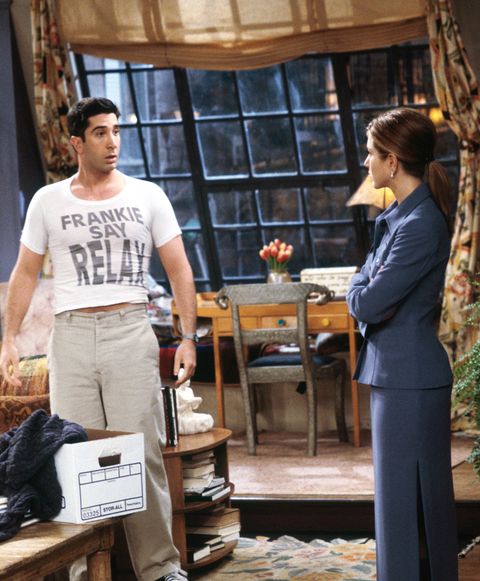 David Schwimmer as Ross Geller on Friends in a “Frankie Say Relax” T-shirt.

Spears was notably one of the main celebrities in the early aughts who was responsible for popularizing what we now know as the clapback tee: a piece of clothing responsible for some very loud silent statements. And now, it’s making a comeback.

The resurgence of this artifact isn’t too much of a surprise. Over the past two years, and particularly over fashion month, 2000s-era style trends have been gradually resurfacing: micro-minis, platforms, maximalist jewelry, wide-leg denim, claw clips, and scarf tube tops. From TikTok to Depop, Gen Z and beyond seem to be rediscovering the turn of the century’s fashion highlights and lowlights.

Of course, that decade brought us a handful of other clapback tees from celebrities that have gone down in pop culture history. After breaking up with Wilmer Valderrama in 2004, Lindsay Lohan basically announced it to the world on an episode of TRL with a “You Were Never My Boyfriend” tee. She also seemingly took aim at the tabloids by being photographed in a tee that said “Skinny Bitch” when the press wrote stories about her alleged eating disorder. Paris Hilton famously sported shirts that said “Don’t Be Jealous” and “Stop Being Desperate,” likely a jab at her critics (now, most people recognize the latter as “Stop Being Poor,” thanks to some impeccable Photoshop editing.) When people questioned Madonna’s interest in Kabbalah, she was spotted leaving the center wearing a “Cult Member” T-shirt. 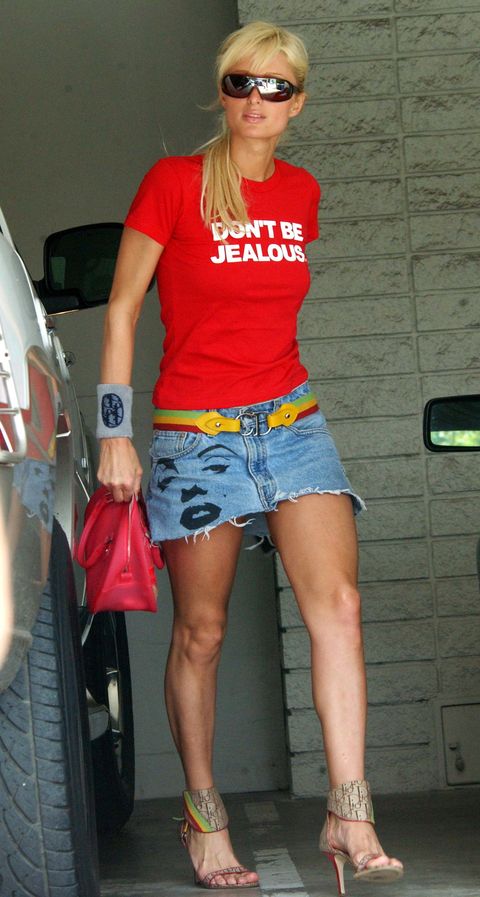 “The clapback T-shirt is much more impactful if it’s photographed, or if you’re seen wearing it,” explains Natalie Nudell, an adjunct assistant professor at the Fashion Institute of Technology. “So there’s that whole double nature of wearing the T-shirt, but then also having someone view the person wearing it, and whatever sort of political or fashion choice they want to make in that context.”

Recently, the trend has seen a revival thanks to a handful of up-and-coming designers’ clapback tees and the celebrities who have been wearing them. Just hours before Charli XCX’s fifth studio album Crash dropped, she was photographed wearing a pink baby tee with the classic adage: “They Don’t Build Statues of Critics.” Basically, Charli wanted to make it clear that she could care less about what any review said about her recent work. The pop star’s T-shirt that was making the rounds on social media came from cult favorite brand Praying, which sells Y2K-inspired garments with religious iconography. In addition to the tee Charli sported, you can find a slip dress that says “Give Girls Money” or a trucker hat with “Trophy Wife” in block letters—or maybe you caught Addison Rae donning its “Holy Trinity” bikini recently.

Likewise, if you’ve been watching Euphoria, you’ve probably spotted a handful of the characters in clapback tees, including Alexa Demie’s Maddy in a “Don’t Be Jel” shirt. That and others are courtesy of kitschy streetwear designer Vanna Youngstein. Additionally, brands like Heaven by Marc Jacobs Unif and Nii HAI have been leading the trend, as well as independent designers like Ashley Williams. “It’s like an exhibition of the “IDGAF” attitude. That’s exactly what we are about. It also just so happens that our collection was super in line with this Magaluf trashy party destination,” explains Nii HAI founder Rosie Williams, whose line features T-shirts that say “Blow Me” and “I Miss My Ex.” 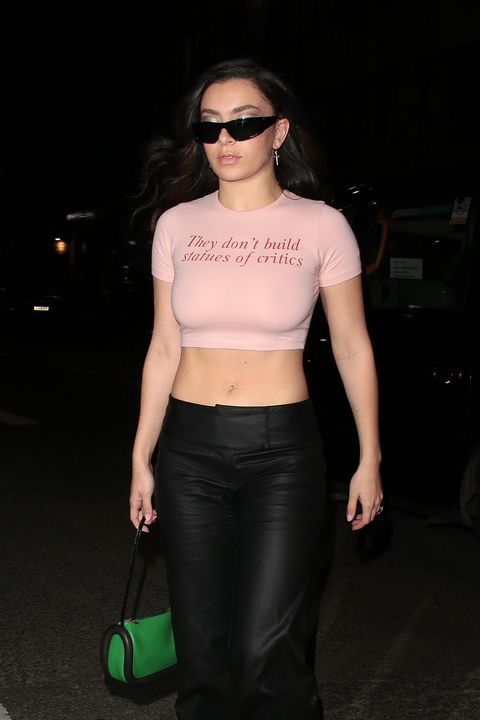 Charli XCX wears a T-shirt that reads “They Don’t Build Statues of Critics” in London.

Not to mention, Depop has been responsible for recirculating these types of vintage tees from the ’90s and early 2000s. It’s also important to note that the revival of the clapback tee can also be attributed to Phoebe Bridgers. One of the merch drops surrounding her sophomore album Punisher directly riffed off of the original “Dump Him” shirt (instead, it was adorned with the words “Punish Him.”)

But the clapback tees are also meeting us where we are in the moment. One of the reasons why this fashion trend surfaced back then and we’re seeing it again now: political unrest. The world was reeling from 9/11 and its fallout and a recession. Over the past few years, we’ve dealt with the reign of Trump, an attempted coup, multiple pandemics, police brutality, climate change, continued racism, another recession, protests in Iran—the list goes on. “It seems that this resurgence of these graphic tees—or something that has a slogan or something on it—happens usually around like times of political unrest,” explains Dawnn Karen, PhD, fashion psychologist.

We’ve also seen injustice in the form of the #FreeBritney movement, where T-shirts with the slogan took aim at her conservators and also were a callback to the early 2000s when people wore #FreeWinona tees after Winona Ryder was allegedly shoplifting and #TeamAniston and #TeamJolie shirts in the wake of Jennifer Aniston and Brad Pitt’s divorce. While these shirts aren’t exactly new, “that kind of clothing as protest works best when we also have social media,” explains G. Carl Rutberg, PhD, adjunct professor of American history at the Fashion Institute of Technology and creative director at Lindman New York. 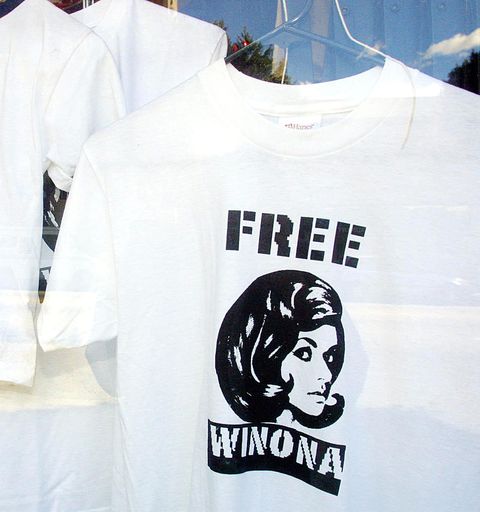 A “Free Winona” T-shirt on display in L.A.

During times like this, people are looking for ways to use fashion as their voice. “If you feel like you don’t have a voice, you’re being marginalized, or you’ve gone through a breakup, just put the shirt on,” she adds. And, she says, it can even be healing.

Driven by escapism from the realities of our socio-political, our thirst for gossip and relationship with social media has also fueled the trend. “In the 2000s, a big part of the way that we got to see these [shirts] were through paparazzi pictures. Paparazzi was becoming more and more pervasive and some celebrities were trying to speak to us through their T-shirts and [by] getting papped. Today, we’re paparazzi-ing ourselves all the time on social media. So perhaps that’s part of why we’re seeing these being worn in photos. I see them more in photos than I see them in real life,” explains Held.

Nudell agrees. “We’re seeing this cycle happen again, partly because of how potent social media is in perpetuating images of people—and not only images people posted themselves—but the public posting about celebrities or musicians, like DeuxMoi.” Combine that with not being seen for a couple of years, and the clapback tee comeback makes perfect sense.

Ilana Kaplan is a writer and editor based in Brooklyn. She covers music, culture and entertainment and has written for Rolling Stone, The New York Times, NPR, GQ and more.