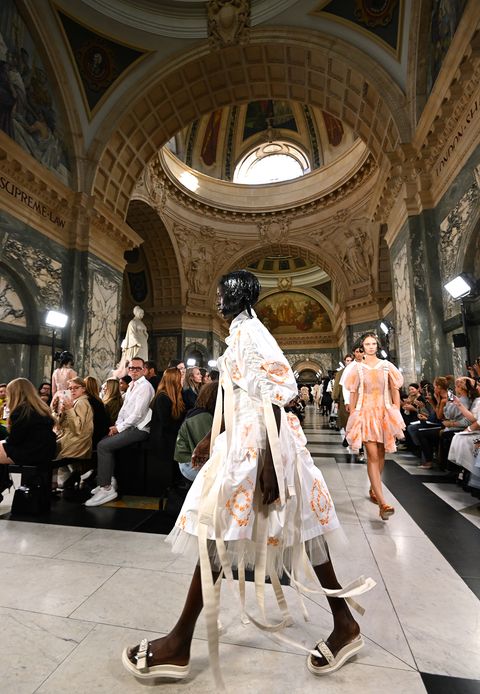 There were actually two queues the day before the Queen’s funeral in London. The first was the main one, the queue with a capital Q, where Brits (including David Beckham) stood for 12 hours to walk by a coffin that—according to every seasoned cab driver I had—was actually empty. (“Her Majesty’s corpse is already resting in peace in Windsor,” smirked one as we chugged across the Thames, peering at people waiting (and waiting, and waiting…) on the other side.

The second was to speak with Simone Rocha, the designer who has come to represent essentially all of Britain’s current style goals. Her tulle poufs of astonishment are wacky enough ride the U.K.’s eccentric fashion legacy, which includes Alexander McQueen’s slashed aristocracy and John Galliano’s shredded luxury. But her stuff also boasts a softness—round sleeves, floral embroidery, pearl beading—that aligns the Irish millennial with Great Britain’s girl crew, including bankable superstars like Stella McCartney and Claire Waight Keller, along with McQueen’s current headmistress, Sarah Burton. Rocha’s also got Haim, Gemma Chan, Rihanna, and Nicola Coughlin on her list of clients, along with a sold-out H&M collaboration to prove her universal appeal. So, what’s next?

Well first, a lot of rumors, none of which anyone official wants to talk about. There’s the whisper network that says she might make a play for Miu Miu; another that aligns her with a cash-fueled cosmetics company; some front row chatter about a Gaultier couture collab. It’s a little like fantasy football, but for fashion—which is to say, mostly wrong, with one or two gold nugget ideas that could/would/should be really rad.

What’s also rad is this current collection, which sees the 36-year-old moving into sportswear, but doing it her way. There’s a fluttering parachute parka that turns Top Gun into an Alice in Wonderland chapter, a debut into menswear that includes plenty of kilts and shirting that their girlfriends will no doubt want to steal, a series of crystal-beaded pocket chains that dainty up and ante up the Hot Topic vibes of Y2K nostalgia, and clever rubber-bottomed Mary Janes that are special without being precious, and based enough in reality that you can actually run to catch a bus in them. (Or, stand in them for hours to see a coffin without hurting your feet.)

But Rocha prefers to discuss future-forward things rather than a recently deceased monarch, though backstage in the queue, she’s having a hell of a time. “Are you sure there’s nothing about mourning?” asks one U.K. journalist rather insistently. “It’s really about moving forward with a sense of urgency,” she replies, noting that the blossoms she referenced—echinacea, daisy, even coffee—have “a sense of medicine to them that represent healing; it’s really meant to be a balm.” As for the veils—some black, some white—Rocha notes, “the veils came originally through the menswear designs…I was thinking about masculinity, and how we embrace and challenge it, and I wanted to bring that fragility into it. The veils became a tool to harness these emotions of feeling displaced, depressed, upset, and the urgency of getting out of that. They felt very uplifting—they didn’t feel like veils at all. More like colorful light that’s been totally aerated. They were really a reference to the parachutes, and feeling lighter. I think, more than anything, it’s about a shedding of the skin.”

As the U.K. geared up to watch a burial, Rocha continued to patiently explain her vision, and the collection it manifested “was this idea of digging deep into the earth. This idea of the heart and soul coming up through the ground…leaves, blossoms, healing through flowers…and just this sense of urgency to physically try and release things. Like, we’ve gotta go.”

“Her beauty and her brain go not together.” —William Shakespeare