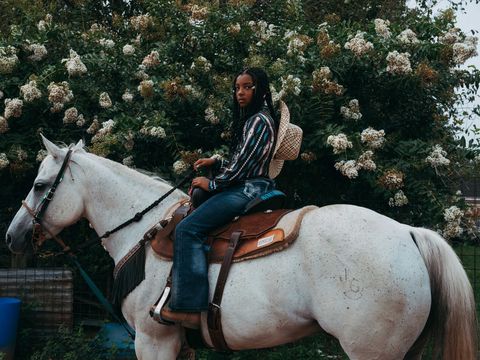 As part of ELLE’s celebration of all things cowgirl this fall, rodeo photographer Ivan McClellan takes us behind the scenes of his mission to rewrite the real story of the Wild West. Read more stories about cowgirl culture here.

It was Ivan McClellan’s first Black rodeo. “I saw extraordinary things that just completely disrupted what I thought I knew about cowboys in the West,” he remembers. “It was a rodeo just like any other rodeo, but with its own flavor.”

That was seven years ago at the Roy LeBlanc Invitational in Oklahoma, the country’s longest-running Black rodeo. Since then, McClellan, a Black photographer from Portland, Oregon, has dedicated his life to documenting a community largely left out of the narrative. In America’s “Old West” mythology, the cowgirl is almost always a white woman and the cowboy is a white man. But history tells a much different story: Experts believe that historically one in four American cowboys were Black. When white ranchers left home to fight in the Civil War, they depended on slaves to take over in their absence. After the Emancipation Proclamation, many of those white ranchers hired now-free slaves who had picked up invaluable skills like herding cattle. Black cowgirls worked alongside enslaved and freed men to help take care of ranch animals. They transferred those skills into Wild West shows and, later, Black rodeos.

It was the start of a long tradition celebrating the legacy of Black cowboy and cowgirl culture. Today, on the Bill Pickett rodeo circuit (named after one of the most famous Black rodeo stars), you might see brightly colored bedazzled chaps and bespoke boots. In East Texas, riders gather before events to eat barbecue and dance to zydeco music. “It’s all about expressing yourself authentically,” McClellan says.

Capturing the unbridled joy of being at a Black rodeo has become his life’s mission. McClellan has been to more than 50 rodeos all over the country to photograph daring bull riders and barrel racers—many of whom, he says, compete just for fun. “These aren’t big money rodeos, nobody is making a living off of it,” McClellan explains. “They’re doing it because they love it, or because it’s what their family does. It’s a way to get on their horse and connect with friends.”

Take, for example, two of his subjects: The mother-daughter barrel racing duo Kanesha Jackson and Kortnee Solomon (pictured above at their Texas ranch). “Ahead of the competition, they’ll sit on the fence, braid each other’s hair, and talk for hours,” McClellan says. “They go out and actually ride, of course, but so much of Black rodeo is about community and camaraderie.” Joy, friendship, family—that is what McClellan captures on camera. Below, McClellan on a few of his favorite rodeo photos.

Kortnee Solomon, 12, in front of her family’s stables in Hempstead, Texas.

“Kortnee was a little standoffish the day I took this picture. She wasn’t talking much until she got on her horse and rode into the arena. Then, she started directing me and telling me where to go to get her best angle. She was like, ‘You need to sit over there by the second barrel, because I’m going to come around.’ After Kortnee was done riding, I told her, ‘You ride pretty fast.’ She said, ‘It’s not how fast you go, it’s how smooth you ride.’ Then she pointed to a bush and asked me to take her picture there. She had her hat on and smiled. Right before I took the picture, she said, ‘Wait a minute, wait a minute!’ She took off the hat and looked directly at me, totally stone-faced. She’s a spitfire. She takes charge of situations and has absolute confidence. She doesn’t just ride horses, she plays basketball and does cheerleading at school. Everything she tackles, she does it with as much energy as she does barrel racing.” 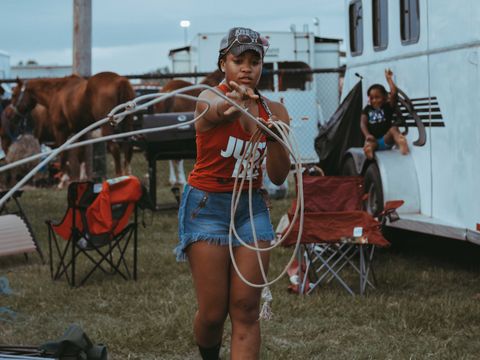 Raemia Clemons, 24, during a break at the Roy LeBlanc Invitational in Oklahoma.

“A lot of rodeos are like track meets. People come in, do their event, and leave. But Black rodeos are more like a show. There’s music, barbecuing out in the parking lot, and dancing. Everybody is there to have a good time, and all of your family and friends come and hang out. It’s like a little reunion in addition to a rodeo. When Raemia isn’t barrel racing or steer un-decorating—which is a sport you’ll see mostly at Black rodeos, where riders chase a steer down and rip a piece of duct tape off of its back—she’s hanging out with her family on the campgrounds, usually wearing cutoffs and a tank top. In this picture, she’s practicing roping on a calf dummy, just because she loves it. She competes in multiple events and usually participates in the rodeo’s opening ceremony. Black rodeos kick off with a rendition of Lift Every Voice and Sing, the Black National Anthem, while someone on horseback rides around with a Pan-African flag. The announcer usually knows everybody and has playful banter with folks. If a bronco rider is doing a good job, the announcer will be like, ‘Hey, take off your hat and wave it around!’ A black rodeo is just like any other rodeo, but with its own flavor. Everybody knows each other. It’s less about competing against the other riders and more about showing what you can do.” 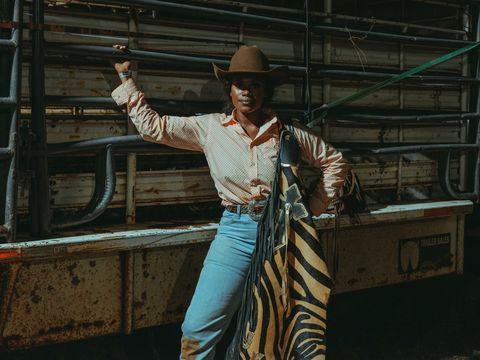 Ja’Dayia Kursh, 23, poses with her tiger chaps after riding a bucking bronco in Okmulgee, Oklahoma.

“Black rodeo sports aren’t gendered. There’s no rule that says a man can’t barrel race or that a woman can’t ride a bull. But it’s just not typically done. When I asked Ja’Dayia what event she was going to enter, she said, ‘I think I’ll ride a bronco.’ When she got in the chute, where the bulls and broncs are kept, the rodeo announcer looked surprised. ‘Wait a minute, is that a girl down there?’ he asked. Ja’Dayia yelled back, ‘It sure is!’ Then she rode her Bronco into the arena and the crowd went nuts. Ja’Dayia fell off about three seconds in, but I think she was more upset that the announcer called her a girl. Ja’Dayia played football in high school and was the first Black rodeo queen in Arkansas. She’s always been defiant to norms and expectations. Riding a bronco was just her in her lane doing what she does.” 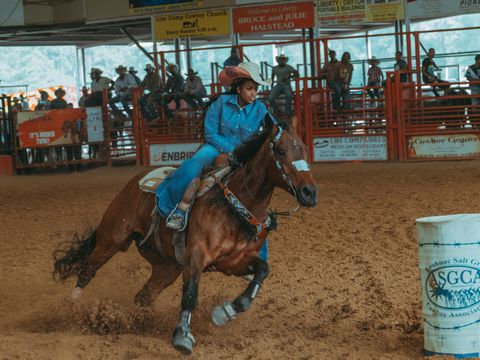 Ajiah Arceneaux, 16, races her horse around a barrel at a rodeo in Liberty, Texas.

“Ajiah dressed up in a full Texas tuxedo for this rodeo on Easter Sunday. At 16 years old, she is really coming into her own as an athlete. A good time in a women’s barrel racing event is 14 to 17 seconds, and Ajiah is already running the barrels in about 16 seconds. She enters the arena, goes around the first barrel, and then sprints full speed to the second barrel. By the time she gets there, she’s actually slowing down her horse to get around smoothly. She’s in command of the animal, but the horse also knows what to do. They are one unit.”

Rose is a Senior Editor at ELLE overseeing features and projects about women’s issues. She is an accomplished and compassionate storyteller and editor who excels in obtaining exclusive interviews and unearthing compelling features.