Meredith Sneed, a 17-year-old high school senior from Savannah, Georgia, was at Mock Trial practice for her high school when the news of Justice Kentaji Brown Jackson’s Supreme Court confirmation broke. Below, Sneed reflects on how the momentous moment made her finally embrace her hair.

Read all of The State of Black Beauty here.

Ingrained into my roots is an undeniable stress point—my hair. It seems impossibly vain to stress over the perception my hair leaves after an unmemorable interaction with someone. No one will remember a runaway strand’s curve or an overly-greased section’s shine. But I will, and as much as I tried to stop myself, my identity was strictly tethered to the mass of Black coils on my head until a couple of months ago. 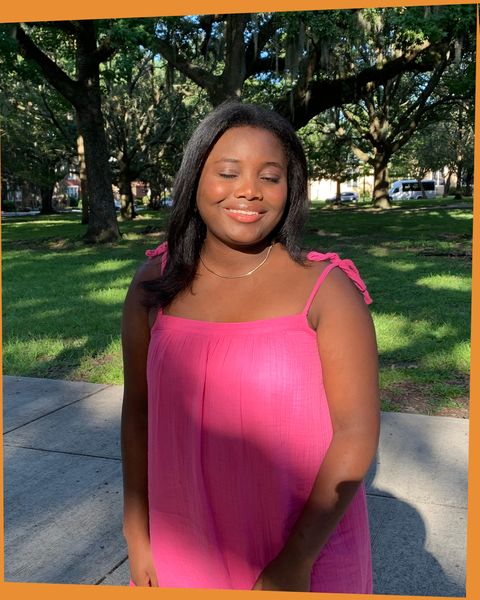 Everyone does little actions that comfort, soothe, or encourage them for some uniquely specific reason. I predictably check every turned-in assignment repeatedly during the school year to ensure it is really turned in. Some days, I pretend I am performing an air drum performance with my hands for an audience of one. Most often, when I am anxious for one reason or another, I will grab a strand of hair and tuck it firmly behind my ear. Two times an hour. Thirty times. A hundred times. It gets redundant, but I will do it nonetheless.

On February 25th, 2022, as I worked through the opening statement for my upcoming high school mock trial competition, my hair was patiently waiting to be tucked when my parents texted to announce that Ketanji Brown Jackson was nominated for the Supreme Court. On March 21st, my fingers inched towards my hair while I sat in the living room and rewatched Ketanji Brown Jackson’s opening statements with my mother. I think a part of me will always remember my mother holding back tears while listening to Ketanji Brown Jackson tell her parents she loved them as she began her hearing before the eyes of history. On March 22nd, my attention was sharply split between the class I was in and the live coverage of the confirmation hearings that forced me to rewind, listen and sit in thinly concealed shock at the often bewildering questions she endured. I would not have expected to hear a United States Senator ask a Supreme Court nominee to define the complex word “woman.” Never would I have expected to hear a nominee asked whether they support a book some people believe teaches children that babies are racist. Even now, it seems nearly impossible to think these hearings happened this way. Despite these hard moments, I knew I was gaining something critical. The United States Supreme Court would have its first Black woman Justice, and that fact is too powerful to be dismissed. However, my idealistic dreams for that week were diminished by the anger simmering inside me. This triumph would not come easily. As I sat and watched, I could not help but grip the loose strands of my hair.

On March 23rd, my fingers stilled in my hair, as I watched the Senator from my state, Jon Ossoff, question Ketanji Brown Jackson on day three of her confirmation hearings. After this third day, I realized I could steal this moment for myself and wring the lessons I needed from it, or I could sit by and let this moment tarnish under the hungry stares of those waiting to pounce on our victory. So on June 30th, the hair strands fell, discarded to the side, the action forgotten. I watched Justice Ketanji Brown Jackson sworn into the Supreme Court with my hair freely swaying in the wind.

The nine-year-old version of myself would have fallen out over this. The Supreme Court now had its first Black women Justice, and, more importantly, I was not thinking about my hair. Vain, I know. 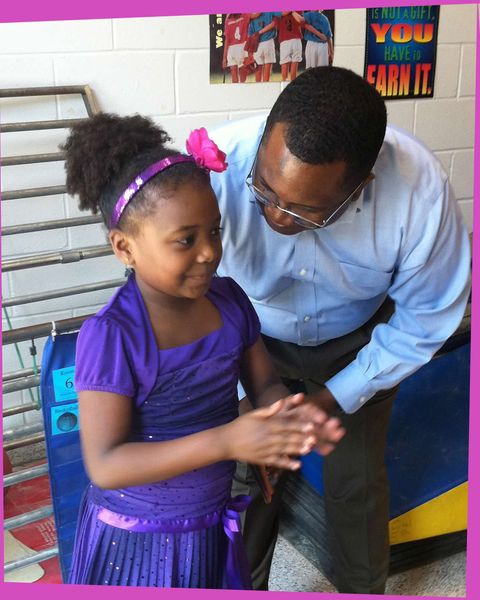 Meredith, her dad, and the Daddy-Do

That nine-year-old would sit in front of my parents’ sweeping mirror and try—but fail—to contain the overarching grin on my face as my father would lovingly comb back pieces of curly hair away from my face. As I sat in the coarse whitened chair of my parent’s bathroom, he would tell me stories, and I, unfailingly, would listen. More and more about my parents’ lives would climb up from him: their beginnings in the belly of the South, to the trials of two Black kids at the grand Ivy League, and now back, somehow even deeper into this southern world. My father loved the South in such a profound, reflective, and honest way that this love had no choice but to overflow to me from these stories. Each tale was made more majestic by the mere fact that out of all the obstacles needing to be overcome in his day, he was here with me, brushing my curled hair out of my face and instilling in me every bit of confidence he dreamed I would have. As he finished, my father would back away, smile at me in the mirror, and present his high-praised style for my hair, the Daddy-Do.

The Daddy-Do has morphed into the Meredith-Do, created through many hard-won battles with an electric straightener and my own stories to prepare me for the day. But, I wish seventeen-year-old Meredith could have told nine-year-old Meredith that as many hours as I debated the pros and cons of straightening my hair—a trait passed down from my lawyer parents and my own years in mock trial—I had an ulterior motive for straightening my hair.

A little Black girl, in a predominantly white world of the deep South, saw the silky blonde hair of the people around her and knew what she wanted. My beloved hair could no longer have curls. Perfection was defined by the effortless bounce of straight hair, the long tendrils of new hair, and the milky sheen of their hair. Putting aside any clouds of doubt, I went to my mother and asked her to straighten my hair. This was my beginning. Once my curls were gone, the little girl in the mirror with her father would be gone. In the honest love I was gifted for the South, I became keenly aware my environment had given and taken an identity for my hair. It was the state I grew to love my hair as my parents loved it. It was the home where I nearly burned it all off. It was the memory I will keep of reconciling the straight and curly identities that can coexist. 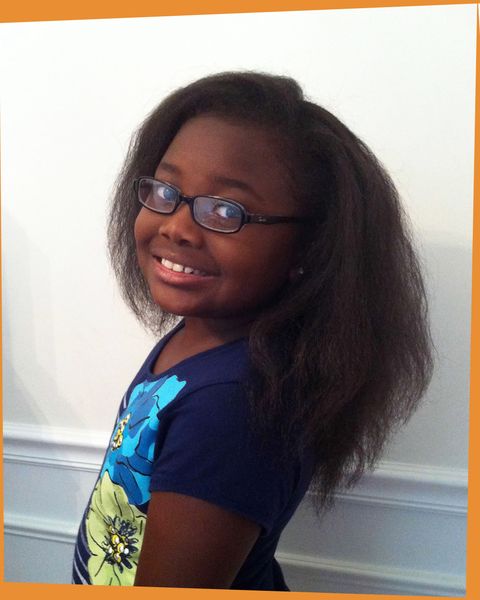 In all her love, my mother refused to put chemicals in my hair—a fact I will be forever grateful for. Months ago, I found a note she had sheltered away. Only a title and a date were written: the last day she received a relaxer. Did she think about that note the first time my hair was straightened? Or all the times after?

I do not regret my decision much. Replication is what I knew. But, I have a hard time moving past it. Moving past something that made me think I could fit in: among my classmates, my friends, or the nine faces that make up the United States Supreme Court.

Nine-year-old me would most certainly need a long sit-down talk with seventeen-year-old me. An encouraging but firm conversation, where I would calmly explain that she belongs in any room she wants. The classrooms. The sleepovers. The Supreme Court chambers. Honestly, at sixteen, I would not have believed that. However, a moment that wrote the Supreme Court’s history also rippled into my life. Increasingly, I find myself caring less and less about my hair. Trust, I still want it to be presentable, but it no longer has the same hold on me that it once did. 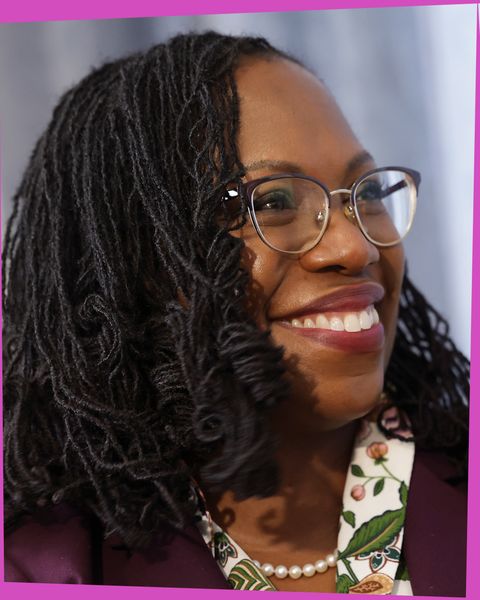 The hazy lens I used to shape my perspective on life cleared the moment I knew the flowing mass of braids crowning Justice Ketanji Brown Jackson’s head would remind me of lingering desires to wear my own hair just as confidently. My hair has never been anything other than curly for the first years of my life and straight for the more recent years. I did not look at Justice Jackson’s locs and see my own hairstyle reflected. Instead, I saw my mother dropping me off at school, headed to court with her hair braided into a living crown. I saw my sister flying in from college with a cloud of curls framing her face. I saw myself with straight hair and curly. Desires to wear my hair in styles that seemed too elusive to grab hold of and try, suddenly stretched endlessly in front of me. I did not want to imitate. I wished to sculpt a distinct awareness that could be applied to the foundation of myself I was already familiar with. Justice Jackson graciously provided the template.

I started this summer with a list of goals I wanted to achieve. Towards the top was to go curly for some amount of time. As my summer ends and my senior year begins, that goal was my greatest promise for the eighteen-year-old version of Meredith coming in a few months, and I can happily say it was checked off the list. The seventeen-year-old me, who watched Justice Jackson sworn in with locs, would be proud I am discovering there is more than one way to wear and love my hair. I can keep my hair curly, or I can straighten it more. The choice seems less daunting knowing it does not fill me with the hair-tucking anxiousness of the past. 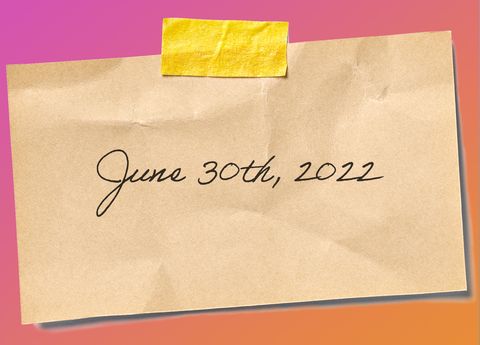 Years from now, I might have a child, and they might go through my closet. While searching, it is possible they will find a note with a single date: June 30th, 2022. They might wonder, wonder, and wonder some more, what this date means. Eventually, they might look up the date and discover this was the day the first Black woman was sworn into the Supreme Court. In my older age, I will remember that date as the day Justice Ketanji Brown Jackson was sworn in, and as the date, my deep-seated, misguided conceptions about my hair nearly faded to nothing. Completely is waiting to be bestowed on an unsuspecting date by eighteen-year-old Meredith.

What Is RxPass, and Can It Save You Money on Prescription Medication?
6 Ways Estrogen Levels Affect Your Skin—And What to Do About It
We Tried A Blind Test Of Expensive Makeup VS Dupes
FDA Proposes a Plan For an Annual COVID Shot — What to Know
#639 Pretty Nail Polish Tutorial 2023 | Easy Colorful Nail For Beginner | Nails Inspiration