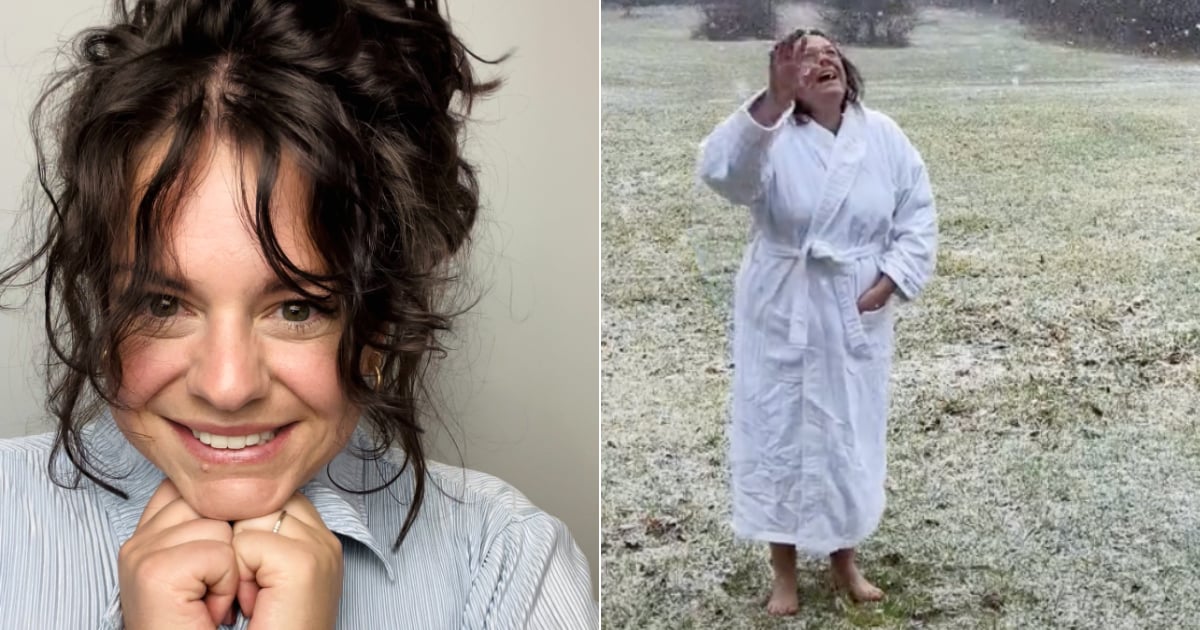 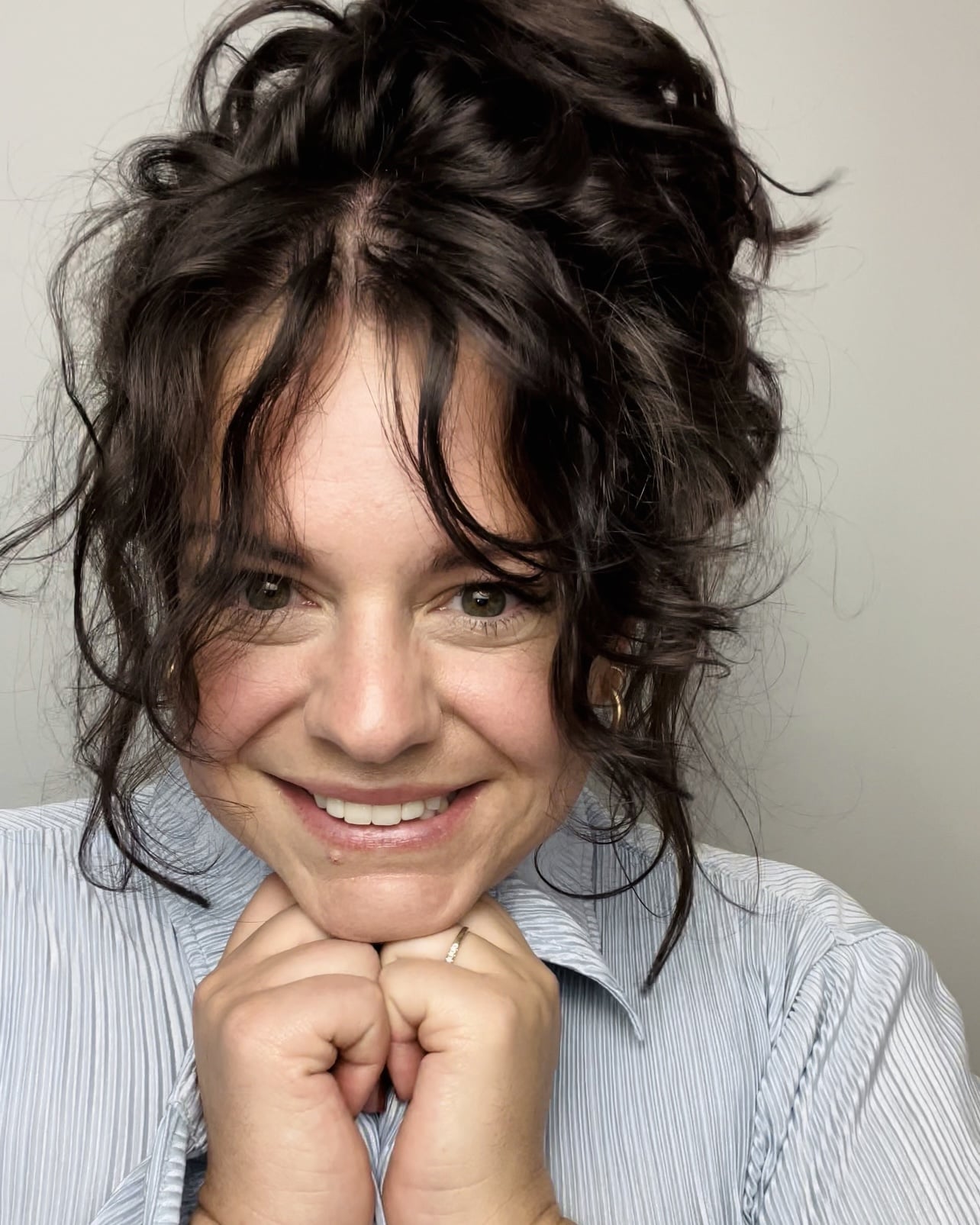 Anna Przy is most recognizable for her TikTok videos that involve a bathrobe, her front yard, and no shoes. They feature a barefoot, bathrobe-wearing Przy peering up at the sky and politely but firmly requesting a break from whatever higher power might be listening. In one recent video, she says, “I gotta be honest with you, I don’t really wanna do today.” In another, she says, “I don’t have the time or the energy or the patience for any shenanigans this week, so let’s just keep it cool and calm and casual, OK?”

The videos vary, but each one ends with Przy striding purposefully off screen and snapping, “It’s called manifesting, look it up!”

These TikToks are a near-perfect snapshot of who Przy is and what she stands for. Living in Ann Arbor, MI, the sweet-toned Midwesterner’s account aims to promote a burnout-free zone, where being kind to yourself matters a lot more than how productive you are.

She tackles fear of the unknown, the myth of hustle culture, body image, and an array of other mental health topics. She tells POPSUGAR that she calls her content “mental health comedy.” And with over 450k followers between Instagram and TikTok, she’s found an audience that appreciates her realistic, lighthearted takes — and her commitment to honesty and being true to herself, no matter what.

Przy started posting videos during the COVID-19 pandemic when she was temporarily laid off. It took that forced time away from work for her to realize how extreme her burnout was. It was the product of a “go, go, go,” attitude she’s had for years, she says. “It was like I hit a wall going 150 miles an hour,” she says. “I’ve been recovering ever since.”

At the same time, the pandemic was causing major emotional upheaval. “Basically every single wound in my whole life was opened back up,” Przy remembers. Looking for an outlet, Przy found TikTok — “the first time I ever got on a social media platform” — and just started talking. “I just needed to talk to somebody, besides the one [other] person in my house,” she says. The growth of her audience came as a surprise. “All I was really saying was exactly what was going on, and that’s all I’ve ever done.”

Przy’s personal mental health journey started long before those first TikToks, though. At age 19, she says she sought inpatient treatment for anorexia, which required her to see a therapist and a psychiatrist. After growing up in a house where mental health was highly stigmatized, it felt like “this huge leap into the mental health world,” she says. Over the years, her mental health focus shifted from eating disorders (Przy says she’s in recovery now) to dealing with things like depression and burnout.

Burnout is a huge theme in Przy’s content for a reason. She wants to tell people the things she wishes she’d been told about mental health and dispel the pervasive myths around work culture and self-value. “I want to be who I wish I had for myself,” she says.

Przy on Check-Ins, Manifesting, and “Keep It Up, Cutie, I’m Proud of You”

Przy makes her videos completely off the cuff and in the moment. What she says is whatever she’s feeling — right then, right there. “I literally sit down and I’m like, ‘What’s going on right now? What are you feeling? How’s your day?'” It’s a valuable way to check in with herself and give space to her emotions.

The TikToker admits, however, it can be scary when she feels down for multiple days in a row. “Sometimes . . . you just want to push your emotions and all of your feelings to the back burner,” she says. “I’m like, ‘No, I got to really think about this and maybe write something.'”

Because of her own experiences with burnout and depression, much of Przy’s content revolves around self-compassion. One of her signature lines is “Keep it up, cutie, I’m proud of you,” which she’ll usually drop at the end of a video. “It’s something that I would want somebody to say to me,” she says. “People are like, ‘When you call me a cutie, that’s the best part of my day.'” It’s also the line people have said to her when they recognize her in public. “This is like a cool, positive thing that we’re doing together,” she says.

Przy does occasionally post about body image or open up about her eating disorder, but she says she finds it difficult to talk about due to internalized stigmas. “A lot of people with eating disorders don’t get help because they don’t look like somebody with an eating disorder,” she says. “Even when I was very sick, nobody considered me underweight, so it took me a long time to get help.” On days when she feels brave, she says, “I do talk about it because it’s important to see people in every body size, dealing with the things that everybody deals with.”

Why oh why my brain chose THIS OF ALL WEEKS to be fixated on ‘WHAT ARE YOU DOING WITH YOUR LIFE!?’ #keepitupcutie #yourehere #dogoodthings #dowhatmakesyouhappy

The “Keep it up, cutie” content creator is committed to being 100-percent authentic in her content, though. Some days, all that energy and joy and humor is really how she’s feeling. But other days, her TikToks reflect the low energy. “I’m never going to be pushing through something to say something I don’t feel in the moment,” Przy says. She thinks that’s what people love about her content: her commitment to honesty, no matter what she’s going through. “I’m trying the hardest to just be me, and that’s tough,” Przy says, “but I don’t think people always get to see that every day — who somebody [really] is.”

For her, it’s not about being perfectly upbeat and positive. Actually, it’s not about being perfect, period. Those bathrobe-wearing, yelling-into-the-void videos? She films them rain or shine, no matter how cold her feet are afterward. In fact, “it’s better when it’s snowing,” Przy says cheerfully. Stepping outside in freezing-cold weather is a “shock to the system . . . it’s always going to change your day,” she points out. “One day it was sleeting and I was like, ‘This is an opportunity. I better do it.'” It doesn’t even matter if she’s not manifesting “correctly,” as some people have told her. It’s not the point. “I’m speaking things out into the universe that I want or don’t want, and I think that’s still doing something correctly,” she says. Plus, “if you go outside and scream, no matter what, your day will improve.”