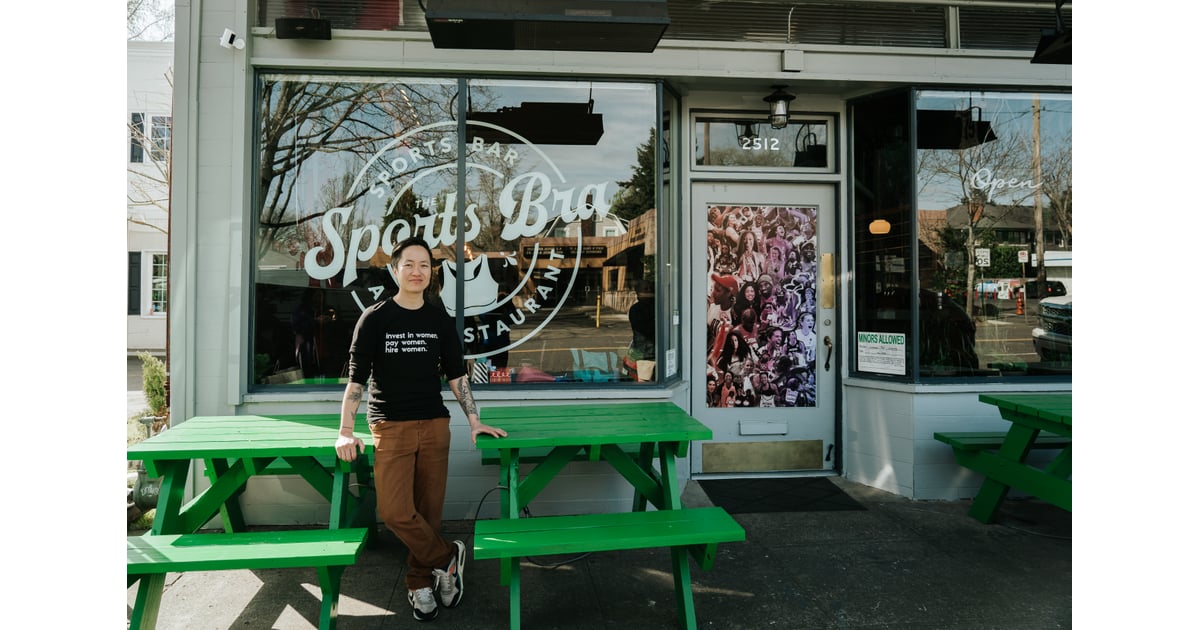 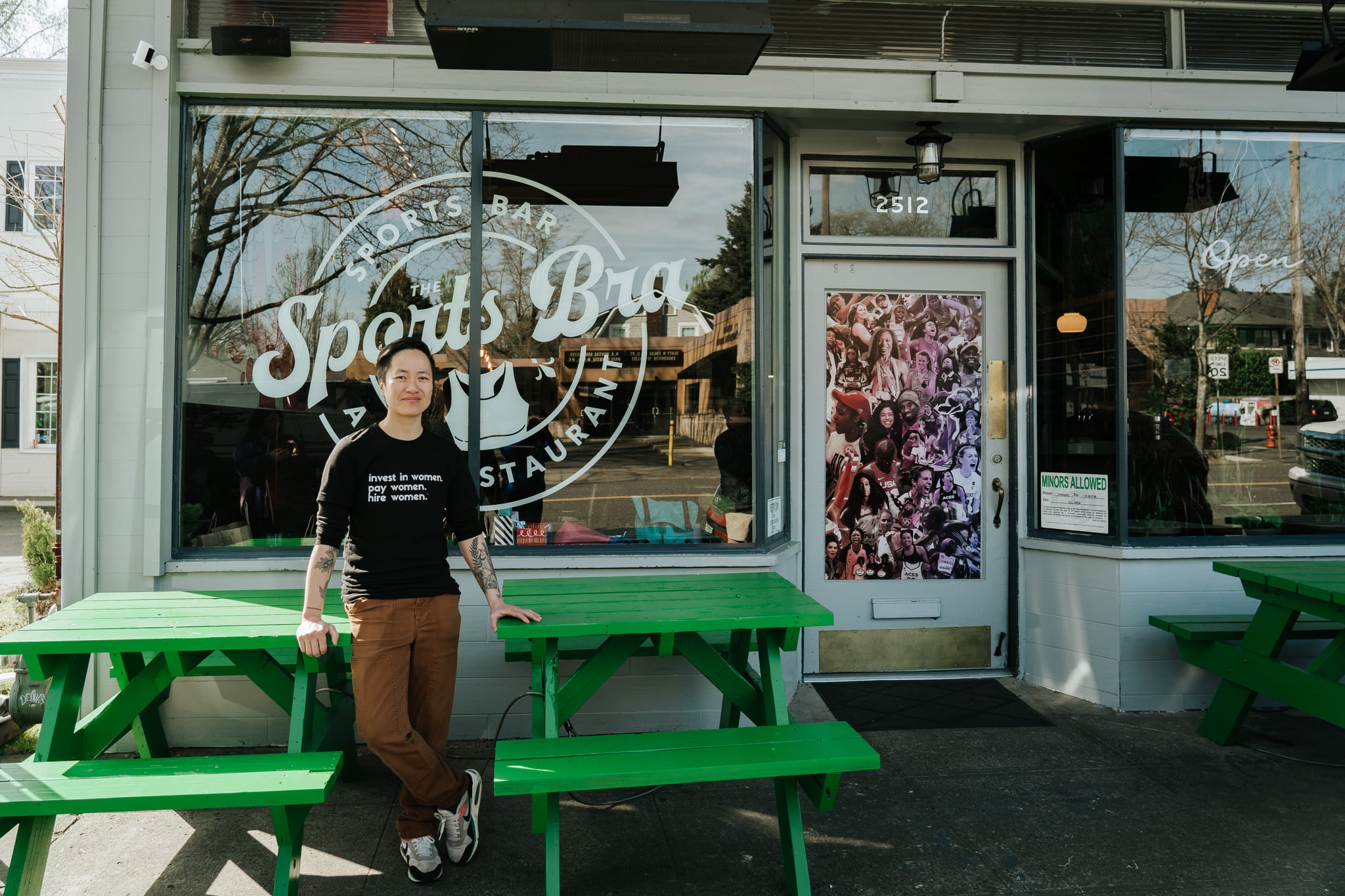 Last month, patrons waited in line for four hours to get into Portland, Oregon’s hottest new spot. By the time they finally got through the doors, some burst into tears while others hugged the bar’s owner, Jenny Nguyen (shown above). It was the weekend of the NCAA women’s March Madness tournament, as well as opening weekend for The Sports Bra, a sports bar dedicated to only showing women’s sports on their televisions. What had started as kind of a joke — and something Nguyen wished existed for her and her friends to go watch games — had clearly hit a nerve.

Nguyen was born and raised in Portland, a city that just so happens to be the perfect spot to open a bar focused on women’s sports. Their National Women’s Soccer League team, the Portland Thorns, regularly sets attendance records. Locals love the Seattle Storm, the Pacific Northwest’s WNBA team. And they cheer on the University of Oregon’s women’s basketball team, whose players have been drafted in the top rounds of the WNBA draft over the past few seasons.

“To bring positivity to the city I love means a lot to me, to have the community come out and be like, ‘We needed this,'” says Nguyen. “Right at this moment there are only a handful of cities The Bra could have launched in, and Portland is at the top of that list for me.”

“Forty percent of athletes are women, yet they receive less than 10 percent of all media coverage. That number is up from just 4 percent in recent years, due to a concerted effort to get more visibility for women’s sports.”

To understand why The Sports Bra has resonated so deeply with people, it helps to understand the frustration of being a women’s sports fan. Forty percent of athletes are women, yet they receive less than 10 percent of all media coverage. That number is up from just 4 percent in recent years, due to a concerted effort to get more visibility for women’s sports. But it’s still low enough that, in order to watch their favorite teams, women’s sports fans have to put in real work, cobbling together streaming services, live streaming games on Facebook, YouTube, or Twitch, or just hoping that they can view the game in person.

In 2019, when the Washington Mystics were in the WNBA Finals for the first time in franchise history, Natasha Cloud’s family went to a local sports bar and asked them to put on the game so they could watch Cloud play. The bar manager reportedly laughed in their faces and refused to put the game on. “Out of all 30 screens … 1 couldn’t be turned to women’s basketball because ‘football’ was on,” Cloud tweeted at the time.

“Women’s sports are ignored by mainstream TV channels,” says Stephanie Arthur, a longtime women’s sports fan from Seattle. “The fact that the only reason I am currently able to watch my home NWSL team right now is because I had to purchase a streaming app — that is frustrating. It further perpetuates the stereotype that men’s sports are more important and worthy than women’s sports.”

Arthur, 48, was so moved by the mission and existence of The Sports Bra that she and her family built a visit into their Spring Break road trip this past month. “I am a mother to two teenage boys,” she says. “I want them growing up knowing that women and women’s sports are super fun to watch and support. It should not been seen as ‘lesser than.” 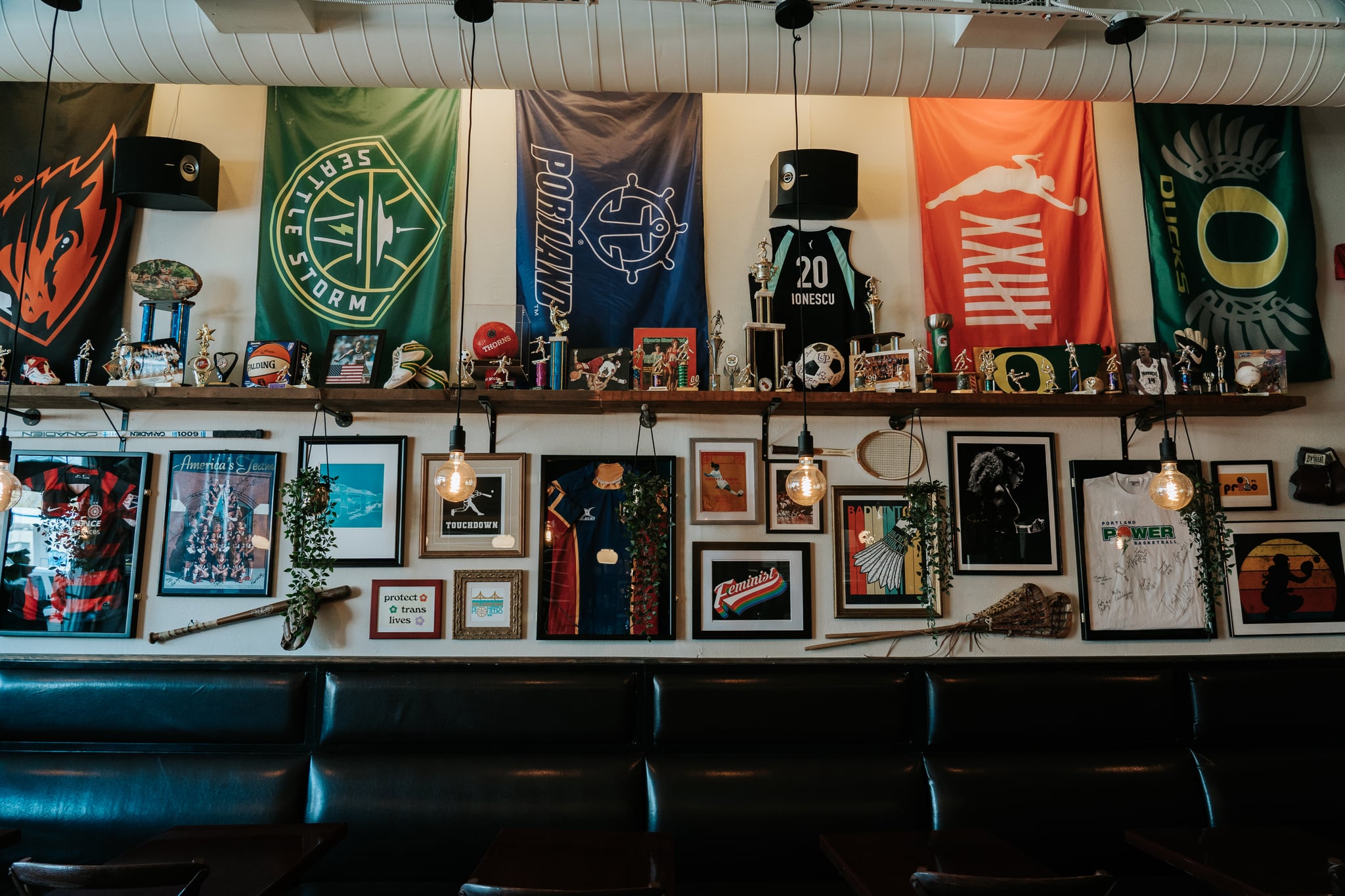 It’s possible that change will happen sooner rather than later. Networks are starting to realize the truth: that if women’s sports are on TV, people will watch them. Women’s sports viewership across ESPN networks increased 26 percent within the last year, with 72 million viewers watching women’s sports alone. That women’s March Madness championship game between UConn and South Carolina that Sports Bra patrons lined the streets to watch reached 4.9 million viewers nationwide, up 18 percent year-over-year. ESPN will have more than 12,600 live women’s sports across upwards of 26,000 hours of coverage which includes an expanded WNBA postseason, more NCAA championships, and 40 percent of ESPN+ programming dedicated to women’s sports.

That’s progress — kind of. While ESPN+ boasts that its app airs 40,000 games per week, that’s just for at-home users. The commercial version of the app only has about 8,000 games and Ngueyn says the company estimates that just four of those games are women’s sports.

“It’s not surprising if you think about it from a business model standpoint,” says Nguyen, of the dearth of women’s sports in the commercial app. “How many bars and restaurants would ask for women’s coverage? There hasn’t been a demand for it before, so why would they put that on the commercial product? For me, I jumped to ‘of course you don’t have it’ and their answer was ‘literally no one has ever asked for that before, it never occurred to us.'”

And it’s possible that making women’s sports content available on the commercial app might make bars and restaurants more likely to put those games on, though that’s not a guarantee. Customers often have to request that content. But as more customers watch and become invested in their favorite women’s teams, the likelihood of them wanting to watch them in their favorite local bar increases, too.

What helps keep Nguyen motivated each time she has to fight a different streaming platform for access to women’s games, is the thought that the next women’s sports bar has an easier time.

“We’ve let the screen go to the screensaver and it’s to highlight that here we are, a location that is dedicated to showing women’s sports, and there aren’t any to watch.”

Right now, the TVs in The Sports Bra aren’t always playing. Just Women’s Sports, a website dedicated to covering exclusively women’s sports, has given the bar access to their catalog, so when there isn’t a live game going on Nguyen could cue up a highlight reel or historical game. But she’s just as likely to let the TV go to its screensaver.

“We’ve let the screen go to the screensaver and it’s to highlight that here we are, a location that is dedicated to showing women’s sports, and there aren’t any to watch,” she says. “It isn’t because the women aren’t out there playing, but because there is nobody out there televising it.”

The Sports Bra’s mission to highlight women and girls in male-dominated spaces doesn’t stop at sports, though. They have 21 beers and ciders on tap and all are women-owned or operated or created. All their wine is from female vintners and their house wine is made by a player for the Oregon Ravens, the city’s semi-pro women’s football team. The beef they serve is from a female rancher in Eastern Oregon and their spirits and signature cocktails are from a Portland-based distillery that’s women-owned and operated. Even their furniture was built by Girls Build, a local non-profit that teaches girls ages 7 to 13 how to do construction work.

The patrons of The Sports Bra understand how important its mission is. Because yes, it’s about having somewhere to have a drink and some food, and watch the game with your friends. But it’s also about equity.

“I know that one of the biggest ways that women’s sports can grow is through access, whether it’s attending or being able to watch games on TV, and so it’s just so exciting that there’s such a warm place dedicated full-time to showing women’s sports that’s also committed to their community and encouraging kids to participate and be active as players and as fans themselves,” says Steph Cheng, a 36-year-old from Los Angeles who stopped in to The Sports Bra during a recent family visit to Portland. She didn’t have time for a drink, but she snapped a few photos anyway.

It was worth it, she says: “The vibe was so good.”